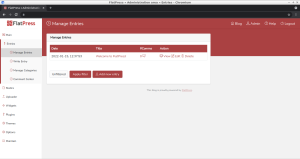 hope you had a good start into 2022. These are strange and sometimes exhausting times out there, stay safe and keep smiling!

As you may or may not know, franah works on a complety new Admin Area for quite a while now. It presents all the known administrative functions in a stylish new way and also works great on your mobile gizmo, e.g. smartphone or tablet.

What we need to do now is testing the new Admin Area in every possible way. Is everything working fine, does it look good on any device, does it break anything?

This is where YOU come into play: Please help us testing!

(The “responsiveadmin” development branch contains everything you find in the main branch - but with the new Admin Area instead of the old one.)

You could set up a new FlatPress installation, say, under yourwebsite.com/responsiveadmin. Then simply copy the fp-content and fp-plugins folders from your productive website there, so you can edit your very own blog content in the new Admin Area. Also, add the folder of your productive theme to fp-interface/themes to see if your own blog theme works well with the new Admin Area.

Since we are in very early testing, we strongly recommend not to use the new Admin Area on productive sites. Let’s make sure everything works and looks fine first :)

If you have opinions about the new Admin Area, or you want to suggest changes or report bugs, please join the discussion on the FlatPress support forum:

Thank you very much for supporting us!
All the best,
Arvid

log4shell: FlatPress is not affected

You probably heard of the Log4j vulnerability “Log4Shell” which causes trouble for sysadmins and software developers all over the world currently.

Good news is: FlatPress does not utilize Log4j at all, and thus isn’t affected by this problem.

Stay safe out there!